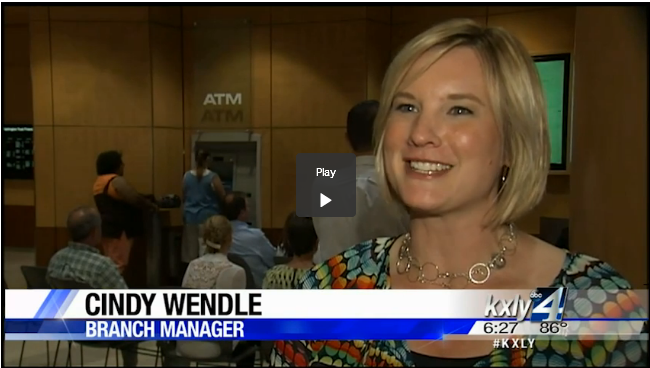 You can watch the full story at http://www.kxly.com/news/spokane-news/spokane-gathers-to-watch-world-cup/26755720

SPOKANE, Wash. -It may be one of the best company parties ideas, a World Cup watch party. Chairs, pizza, and red, white and blue filled the lobby at the Washington Trust Bank in downtown Spokane.”We have a great lobby and people seem to enjoy the big TV we have here,” Branch Manager Cindy Wendle said.”I thought, wow, it would be a good fun time just to kind of celebrate, and it was good timing for the game at one o’clock.”Wendle adds it was a good way for employees, and customers to relax and watch the match hoping for the U.S. win.”I think everyone is very optimistic,” Wendle said. “I think because we tied Germany I think everyone is thinking, okay they can gut this out.””It’s awesome to me to see the organization I work for embraces the spirit of right now,” bank employee Filip Cracium said. “I’m a soccer guy, I grew up with it, I’ve played, coached, everything, so this is fun for me.”Across the street at the Post Street Ale House, a much more rowdy crowd. Fans were glued to the TV for 90 minutes. Neither team would score.”We came out of the full game pretty lucky,” Bren Hovzek said. “They had more opportunities, more time in possession.”After two scores by the Belgium in extra time, the mood in the room was deflated. But in the 107th minute the room erupted as the U.S. scored. But it wouldn’t be enough to win and advance. Fans say they’re proud of the team

“We were in a tough group,” fan Randy Rorrer said. “It just goes to show how much progress we’ve made, we’re a little bit more aggressive than we’ve ever been and it was fun to watch.”